China News Service, Nanjing, February 25 (Wang Yuanyuan, Xu Shanshan) The Nantong Public Security Bureau of Jiangsu Province announced on the 25th that the Public Security Bureau of Tongzhou District, Nantong City recently received a special call. A man read his suicide note when he called the police. The officer and the commander “held the conversation” for 36 consecutive minutes, constantly calming and stabilizing the man’s emotions, and with the cooperation of multiple parties, the man who committed suicide was eventually rescued.

Recently, related media in Malaysia reported that a Chinese man in Kuala Lumpur jumped off a building to commit suicide. His life or death is unclear. The content of the suicide note left by the man is embarrassing. On January 23, Malaysian media reported that in a residential building in Kuala Lumpur, a Chinese man jumped from the 11th floor and his life was unknown. The man left an old-fashioned mobile phone and a suicide note with the reason for his suicide.

A man suffering from depression in the United States injected”psychedelic mushroom” water, a few days later”mushrooms” began to grow in his blood

Data map In order to treat his depression, the American man injected water that had been boiled”psychedelic mushrooms” into his body. A few days later,”mushrooms” grew in his blood, and his life was hanging by a thread. According to a report from the foreign media LAD Bible website on the 13th, the man is 30 years old from Nebraska. His family recently discovered that his behavior was strange and seemed to be in a state of chaos, and sent him to the hospital.

On January 3, two fishermen in Darwin, Australia found a trapped man in the waters where crocodiles frequent. The man was hiding in a tree, naked and covered in mud. His feet were swollen by mosquitoes. It is reported that the trapped man claimed to be a fugitive. He cut off the electronic tracker on his body and escaped from police custody. The man fled to the crocodiles infested river and was trapped. He lived here for four days and lived by eating snails.

Philippine flight attendant was sexually assaulted by 11 people and died. The last surveillance exposure during his lifetime:Suspected body stiffness was removed

On January 6, foreign media exposed the surveillance video of a Filipino flight attendant who was suspected of being sexually assaulted and killed in a hotel on New Year’s Eve. During the surveillance, the stewardess was stiff and completely unconscious and was removed by a man. A few hours later, she was found fainted in the hotel bathtub, with bruises and cuts on her lower body. The stewardess was rushed to the hospital and the doctor declared dead. The police determined that the flight attendants were sexually assaulted and abused by 11 men and arrested 3 of them. 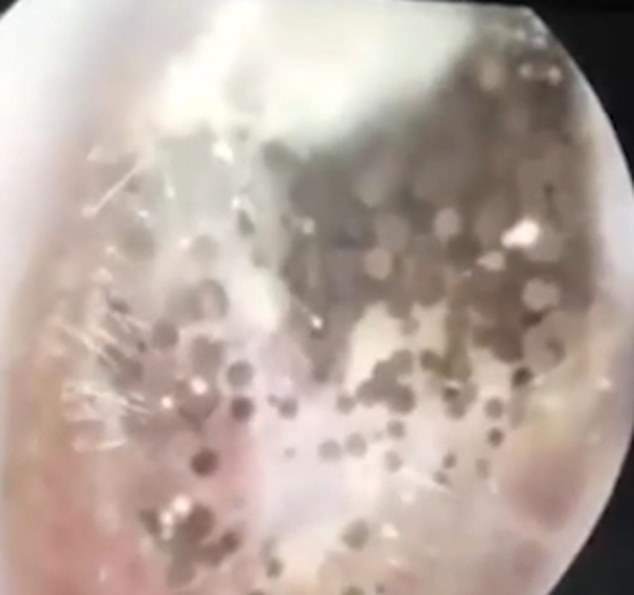 After examination, the doctor found that the man’s ear canal had grown dozens of species Tiny fungus, all the way to the eardrum. These fungi look like miniature mushrooms with a length of two centimeters. Obviously, this is the cause of the man’s discomfort.

According to Newsflare, the doctor who treated this patient was Dr. Cuong from Hanoi. Diagnosing the problem is obviously quite simple, because a simple endoscope entered the ear to find the presence of fungus and the source of pain and itching.

It is said that the doctor has removed the small mushroom-like growths from the man’s ears, but he said that it will take “a few days” for his ears to recover and the pain will also take several days for it to subside. The skin near the affected area is clearly inflamed.

According to reports, the man told the doctor that he had recently shared what was only described as “ear hygiene equipment” with other unnamed people. The man thought he was infected with the fungus because of this practice, but no one can really be sure. It is entirely possible that this man had contracted it himself, or even spread it to other people by sharing “equipment”. The good news is that although this infection is not entirely rare, it is easy to treat.

The Japanese man went to the Emperor’s residence for 2 hours at night, the reason is…

[The reason why the Japanese man went to the emperor’s residence at night for 2 hours…] On the evening of the 2nd, a 29-year-old Japanese man broke through the gate and broke into the Akasaka royal land where the emperor and empress of Japan lived. After walking for 2 hours, he was arrested on the spot by the royal police. . Talking about the reason, the man said that he”wants to see the royal family.”

Lovers’ ways of getting along with each other, what is a good relationship and mutual trust

“The loneliness of a person is not considered loneliness. One person finds another person, and one sentence finds another sentence. It is true loneliness.” Actually, if you are with your lover, if you feel lonely , Then this person must not be the right person. The most comfortable state between lovers is the word “comfort”. No matter what the relationship is, if you feel very tired from getting along, then there must be no way to continue, such as friendship. Such as love.